NYC Labor Against the War: 12.19.11 OWS Report: Mobilize to Defend the Egyptian Revolution 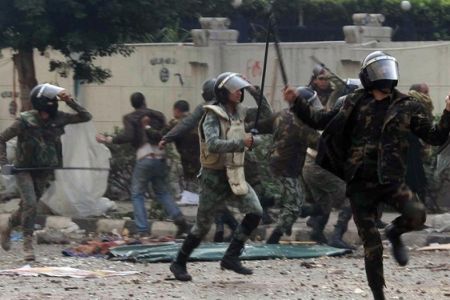 – – – – – – – –
We ask Occupy and all U.S. social justice activists to join us in mobilizing to defend our Egyptian brothers and sisters by immediately organizing mass convergences on Egyptian embassies, missions, consulates, and at U.S. government offices.’
– – – – – – – –

Urgent Appeal to Occupy and All Social Justice Movements:
Mobilize to Defend the Egyptian Revolution
December 19, 2011

In recent days, protesters demanding civilian rule in Egypt have again been murdered, maimed and tortured by the Supreme Council of the Armed Forces (SCAF) and the Interior Security Forces (ISF).

The conspiracy, being brutally implemented in Egypt, is part of a global conspiracy to suffocate mass movements for socio-economic justice and is being done with direct assistance of the American government and the private interests which direct that government. We have word from friends in Egypt that SCAF, ISF and their hired thugs — armed by ongoing shipments of $1.3 billion in weapons from the U.S. government — plan to execute one by one all the leaders of the revolution, and as many activists as they can.

Accordingly, we need to ensure that people and organizers in the US and internationally are involved in closely monitoring the events unraveling in Egypt. By keeping track of the atrocities committed by SCAF and ISF, keeping track of those detained, tortured or targeted, and continuously contacting officials in Egypt and the US to demand accountability, cessation of the atrocities and justice, we can add pressure on SCAF, ISF and the forces they represent. In this way we may be able to play a role in helping save the lives of our Egyptian brothers and sisters.

Evidence of the conspiracy to execute the leaders and participants of Egyptian freedom movement, includes in very small part the following:

In every way, Egypt’s fight is our fight. Just like us, Egyptians are the 99%, fighting for social, political and economic justice.

The same 1% that arms the Egyptian dictatorship commits systematic violence in this country against the Occupy movement; antiwar and solidarity activists; and Arabs, Muslims, and other communities of color.

As the US Palestinian Community Network recently observed, “the same US-made tear gas rains down on us in the streets of Oakland, Cairo and Bil`in.”

Because of Egypt’s key strategic location, the fate of its revolution echoes across the world. Its success will bring us all closer to achieving economic and social justice. But its defeat would be a major blow to social justice movements everywhere, including Occupy.

In short, Egypt is key to the continued success of the Arab Revolution, and movements she has inspired.

For all these reasons, we ask Occupy and all U.S. social justice activists to join us in mobilizing to defend our Egyptian brothers and sisters by immediately organizing mass convergences on Egyptian embassies, missions, consulates, and at U.S. government offices, to demand:

Please endorse and circulate this appeal widely. Please send statements with these demands to the bodies listed below*