NYC Labor Against the War 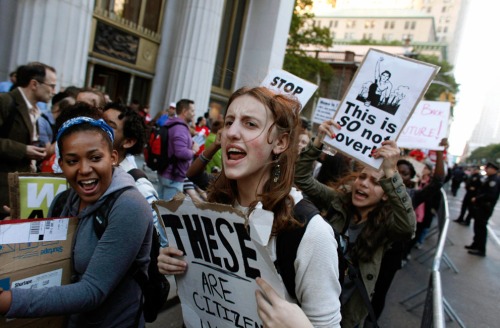 – – – – – – –
“I am coming from there — from the Arab Spring. From the Arab Spring to the fall of Wall Street,” Ezzeldin said, his voice echoed by the crowd of thousands. “From Liberation Square to Washington Square, to the fall of Wall Street and market domination, and capitalist domination.” His passionate speech, which even included a reference to Karl Marx, made a startling comparison between what happened in Egypt earlier this year and what is now happening in the United States.
– – – – – – –

Wall Street Protest Moves to Washington Sq.
A march north from Zuccotti Park under the watchful eye of the police.
http://cityroom.blogs.nytimes.com/2011/10/08/wall-street-protest-moves-to-washington-sq/?ref=nyregion

Occupy Wall Street: Egyptian Activist Goes ‘From Liberation Square To Washington Square’ (VIDEO)
“I am coming from there — from the Arab Spring. From the Arab Spring to the fall of Wall Street,” Ezzeldin said, his voice echoed by the crowd of thousands. “From Liberation Square to Washington Square, to the fall of Wall Street and market domination, and capitalist domination.” His passionate speech, which even included a reference to Karl Marx, made a startling comparison between what happened in Egypt earlier this year and what is now happening in the United States.
http://www.huffingtonpost.com/2011/10/08/occupy-wall-street-washington-square_n_1001775.html?ref=tw

Demonstrators fed up with parties The Republican-American
While tea party activists eventually became a crucial part of the Republican coalition, the Occupy Wall Street protesters are cutting President Barack Obama little slack. They say Obama failed to crack down on the banks after the 2008 mortgage meltdown and financial crisis.
http://www.rep-am.com/articles/2011/10/09/news/national/590123.txt

Peter King fears Occupy Wall Street may gain political clout
‘We have to be careful not to allow this to get any legitimacy,’ King warned. ‘I’m taking this seriously in that I’m old enough to remember what happened in the 1960’s when the left-wing took to the streets and somehow the media glorified them and it ended up shaping policy. We can’t allow that to happen.’
http://www.irishcentral.com/story/ent/manhattan_diary/peter-king-fears-occupy-wall-street-may-gain-political-clout-131415013.html#ixzz1aJkdpAe3

Occupy Wall Street: “It has liberated peoples’ imaginations” | The Media Co-op
The second issue of the Occupied Wall Street Journal came off the presses this morning. As it was unloaded from the truck to Liberty Plaza, people thronged around to read the latest news published for and by some of the occupiers.
http://www.mediacoop.ca/audio/occupy-wall-street-it-had-liberated-peoples-imaginations/8340

Occupy Together
Just to clarify: at least 85 confirmed, ongoing and active occupations & 1,150 communities in some stage of planning worldwide.
https://www.facebook.com/OccupyTogether/posts/302554013092414

D.C.: ‘Occupy’ Protests Spread, Politicians Rebuke – National News Story – WDIV Detroit
Demonstrators railing against U.S. participation in the war in Afghanistan initially gathered Saturday, along with protesters aligned with the national Occupy Wall Street movement. Washington demonstrators chanted “Occupy Wall Street, Occupy H Street, Occupy Everything, and never give it back.” Some started to enter the museum to demonstrate against displays of military drones used during the war in Afghanistan. “We wanted to go inside and protest at those particular items of destruction, and the crowd was pepper sprayed going in and was forced out of the building,” said Brian Morrison, one of the protesters.
http://www.clickondetroit.com/nationalnews/29431533/detail.html

‘Occupy’ protests spread to Washington
Hundreds of people and groups, including “anti-war activists” joined the “Occupy DC” protests against the use of unmanned aircraft by the US military, she said. The protest coincided with the 10th anniversary of the start of the Afghanistan war, where drones have frequently been used.
http://english.aljazeera.net/news/americas/2011/10/201110952635234623.html

John Carlos still up in arms long after his black power salute at ’68 Summer Olympics in Mexico City
It was a simple, non-violent display of dissent, but the blowback was furious. A wave of boos from thousands of angry track fans all but drowned out “The Star-Spangled Banner.” Trash rained down on the American athletes from the Olympic Stadium stands. The death threats came later and lasted much longer.
http://www.nydn.us/odmLPr

Ana Hurra Tour
Via US Palestinian Community Network: ‘Be sure to catch the outstanding ‘Ana Hurra’ play on the harrowing experiences of Palestinian women prisoners. October 9 in Berkeley, and October 14 in NYC, and then Ohio, Detroit, Houston. For more info, tour schedule, and to buy tickets.
http://anahurra.uspcn.org/

We the People: Your Voice in Our Government
We petition the Obama administration to: grant clemency to Native American activist Leonard Peltier without delay.
https://wwws.whitehouse.gov/petitions#!/petition/grant-clemency-native-american-activist-leonard-peltier-without-delay/LLWBZq1S

EGYPT: Army and police massacre protesters at Maspero
The army and police committed a horrible massacre against peaceful protesters today in Maspero, Cairo. Army vehicles ran over protesters. Live ammunition was used. Extensive rounds of tear gas were fired, and showers of beatings from the military police and the central security forces. At least 19 people have been killed, and more than 150 injured. The toll keeps increasing.
http://www.arabawy.org/2011/10/09/army-and-police-massacre-protesters-at-maspero/