“It’s really simple. These young people on Wall Street are giving voice to many of the problems that working people in America have been confronting over the last several years.” 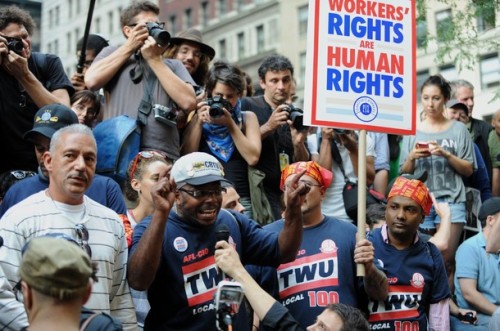 Unions endorse, will join Occupy Wall Street protests
“It’s really simple. These young people on Wall Street are giving voice to many of the problems that working people in America have been confronting over the last several years,” Larry Hanley, international president of the Amalgamated Transit Union, which has 20,000 member in the New York area, told CNN.
http://www.cnn.com/2011/10/04/politics/occupy-wall-street/

Protesters Drawing Support From Unions
‎”Our bus operators are working-class people who are raising children in New York City and by and large they support the protest,” said Mr. Samuelsen, the TWU president. “They’re not going to press our members into service and thrust them onto the wrong side of this protest without a fight from our union.”
http://online.wsj.com/article/SB10001424052970204612504576609420345476398.html

U.S. anti-corporate movement expands
In a sign that the movement is gaining traction, some of New York’s biggest labour unions have now joined protestors (or are planning to join later this week). The city’s 38,000-member transit union pledged its support and is planning to encourage members to join the street demonstrations early next week. Unions representing teachers, doormen, security guards, maintenance workers, postal workers, healthcare workers, and other labour sectors have also pledged support and hinted at future involvement.
http://stream.aljazeera.com/story/us-anti-corporate-movement-expands

Wall Street protest movement spreads to cities across US, Canada and Europe
Unions have have also expressed solidarity with the protests. On Monday, the Transit Workers Union said it had applied for an injunction to stop the NYPD from forcing bus drivers to carry arrested OWS demonstrators. On Tuesday the 700,000-strong Communication Workers of America endorsed OWS, describing it as an “appropriate expression of anger for all Americans, but especially for those who have been left behind by Wall Street”.
http://www.guardian.co.uk/world/2011/oct/04/wall-street-protest-movement-spreads

Occupy Wall Street – Alan Taylor – In Focus – The Atlantic
In New York City’s Financial District, hundreds of activists have been converging on Lower Manhattan over the past two weeks, protesting as part of an “Occupy Wall Street” movement.
http://www.theatlantic.com/infocus/2011/09/occupy-wall-street/100159/

We Are All Human Microphones Now | The Nation
It’s people-powered, no-tech, lo-fi and astonishingly slow. But the human microphone, an adaptation to New York’s laws against amplified sound, may be Occupy Wall Street’s secret weapon.
http://www.thenation.com/blog/163767/we-are-all-human-microphones-now

Protesters’ Newspaper Occupies a Familiar Name
‘The next issue of the Occupied Wall Street Journal is set to be published Thursday and will include coverage of Wednesday’s anticipated union-backed rallies and planned walkouts at some public high schools. Future issues will include a section dedicated to covering other “Occupy Wall Street”-inspired protests sprouting up elsewhere.
http://blogs.wsj.com/metropolis/2011/10/04/protesters-newspaper-occupies-a-familiar-name/?mod=google_news_blog

Occupy Wall Street rallies headed to Wisconsin – JSOnline
Organizers in Milwaukee, Madison and Appleton are planning rallies Oct. 15 as part of an International Day of Action in support of the protests.
http://www.jsonline.com/news/wisconsin/occupy-wall-street-rallies-headed-to-wisconsin-130998613.html

Occupy Baltimore
Occupy Baltimore begins Tuesday October 4th at 12:00 noon. Location: McKeldin Square at the corner of Light and Pratt St. It’s a public space and open to all. Come out and join us, we’ll be there…indefinitely.
https://www.facebook.com/pages/Occupy-Baltimore/144588345637146

Occupy LA Day 3: Sign Here!
A huge round of applause went up and continued as the speaker introduced Vincent from Occupy Wall Street.  Vincent informed the crowd of almost 200 that the Occupy Movement was now in 70 cities.
http://lafiga.firedoglake.com/2011/10/04/occupy-la-day-3-sign-here/

‘Occupy Seattle’ protesters ordered to move tents or face arrest
Seattle Police gave an ultimatum to members of the “Occupy Seattle” protest group Tuesday — either move their tents from public property or be arrested.
http://www.king5.com/news/cities/seattle/Occupy-Seattle-ordered-to-move-tents-or-face-arrest-131101108.html

Students for Justice in Palestine National Conference
Donate! Even donating $10 makes a difference! Plus, you’ll get a button with the SJP logo! Donate more, and get more cool stuff!
http://www.sjpnational.org/

Community stands with ILWU as EGT hires ‘private army’ | The Stand
Last Thursday, Sept. 29, on a beautiful fall evening in the park in front of Longview’s Monticello Hotel, 800 to 1,000 community and labor supporters raised their voices in support of International Longshore and Warehouse Union Local 21.
http://www.thestand.org/2011/10/community-stands-with-ilwu-in-longview-egt-hires-private-army/

Support 99% from Tahrir Square ……. to protesters in USA
http://www.youtube.com/watch?v=7zAvTokkjSg&feature=player_embedded

Egypt’s labour rebellion gains pace
Workers in Egypt can show the way, and at crucial points, may well be able to play a role in giving much-needed support to embattled struggles elsewhere. The more confident, well organised and class conscious the Egyptian workers are, the more the hopes and aspirations of millions around the Arab world will stand a chance of fulfilment in the face of counter-revolution.
http://www.sa.org.au/index.php?option=com_k2&view=item&id=7077%3Aegypts-labour-rebellion-gains-pace&Itemid=386

Egypt-US activists’ pledge of solidarity – Blog – The Arabist
The United States has the largest empire in global history, with more than 1,100 military bases and outposts around the world. America has supported military rule in Egypt, and attempted to put in power Mubarak’s carefully groomed heir Omar Suleiman despite his record of participation in torture and other crimes.
http://www.arabist.net/blog/2011/9/27/egypt-us-activists-pledge-of-solidarity.html

100,000+ rally against austerity in Portugal — in pictures | Reflections on a Revolution ROAR
Enormous anti-austerity rallies shake crisis-stricken Portugal, with organizers estimating an attendance of at least 130,000 people in Lisbon and 50,000 in Porto.
http://www.roarmag.org/2011/10/100000-rally-against-austerity-in-portugal-in-pictures/