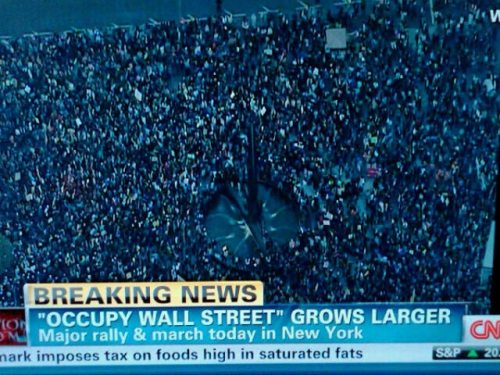 – – – – – – – –
‘‎Thousands of protesters packed Foley Square, standing behind police barricades in front of the courthouse buildings. Some wore union T-shirts, others were in business attire, and many left work early to be there.’
– – – – – – – –

Unions, Thousands Join Occupy Wall Street’s Fight | The Nation
Thousands of protesters gathered in Foley Square today as part of Occupy Wall Street’s largest event to date. Unions from the Transport Workers Union, SEIU 1199, and the United Federation of Teachers all joined the protest to voice their discontent at what they call a bailout of Wall Street, while working class people are left to suffer under a system of austerity.
http://www.thenation.com/blog/163823/unions-thousands-join-occupy-wall-streets-fight

Reinforcements to bolster Wall St. protests – CBS News
‎Thousands of protesters packed Foley Square, standing behind police barricades in front of the courthouse buildings. Some wore union T-shirts, others were in business attire, and many left work early to be there.
http://www.cbsnews.com/stories/2011/10/05/national/main20115857.shtml

Making common cause against Wall Street
‎LABOR’S SUPPORT for the Occupy movement means more than additional resources or big numbers at marches and rallies, however. The involvement of unions in the struggle creates the potential to use workers’ social power in the struggle to win important immediate fights, as well as a longer-term battle for a different kind of society.
http://socialistworker.org/2011/10/05/against-wall-street

Call Out to People of Color From the #OccupyWallStreet People of Color Working Group
The People of Color Working Group was formed to build a racially conscious and inclusive movement. We are reaching out to communities of color, including immigrant, undocumented, and low-wage workers, prisoners, LGTBQ people of color, marginalized religious communities such as Muslims, and indigenous peoples, for whom this occupation ironically comes on top of another one and th…See More’
http://www.peopleofcolororganize.com/activism/organizing/call-people-color-occupywallstreet-people-color-working-group/

Freedom Rider: Occupying Wall Street | Black Agenda Report
Some commentators have likened Occupy Wall Street to the actions at Tahrir Square in Cairo, Egypt which brought down president Mubarak. The Egyptian protesters had a clear demand, that Mubarak had to go. What is the clear demand in Zuccotti Park, that Obama and the Democrats go? That is to say, are they committed to end their support for them?
http://blackagendareport.com/content/freedom-rider-occupying-wall-street

Citing Police Trap, Protesters File Suit
“The police did exactly what they were supposed to do,” Mr. Bloomberg said on Sunday.
http://www.nytimes.com/2011/10/05/nyregion/citing-police-trap-protesters-file-suit.html?ref=nyregion

The revolution begins at home
‎While the Wall Street occupation is growing, it needs an all-out commitment from everyone who cheered the Egyptians in Tahrir Square, said “We are all Wisconsin”, and stood in solidarity with the Greeks and Spaniards. This is a movement for anyone who lacks a job, housing or healthcare, or thinks they have no future.
http://english.aljazeera.net/indepth/opinion/2011/09/20119281581769464.html

Occupy Wall Street: echoes of the past as protesters grasp the future
‎With franchises rolling out in LA, Boston, San Francisco and Chicago, and a growing list of celebrity endorsements, OWS has an advantage that even the most successful political campaigns lack: it isn’t even trying to get someone elected.
http://www.guardian.co.uk/commentisfree/ana-marie-cox-blog/2011/oct/04/occupy-wall-street-protesters

The Occupation Is On The Move, Find a Big Bank Protest Near You | Center for Media and Democracy
In 2009, President Obama told a group of 13 bankers “my administration is the only thing between you and the pitchforks.” Now the pitchforks are being tuned.
http://www.prwatch.org/news/2011/10/11054/occupation-move-find-big-bank-protest-near-you

Occupy Chicago
‎Every penny counts to run an operation like this. We thank you in advance for your generous contribution to the movement, the 99%.
https://www.wepay.com/donate/165154

Cops for Labor? | Dollars & Sense
The police unions and police management negotiate a unifying agenda; the unions then function both internally, as a mechanism for preserving the loyalty of the low-level officers and externally, as the political arm of the police institution overall. The police union becomes, at once, the lobbying body, the media representatives, the fundraising mechanism, the electoral machine, and—when they participate in demonstrations—the shock troops of the law-and-order agenda.
http://www.dollarsandsense.org/archives/2011/0911williams.html

Egyptian workers challenge military rule|8Oct11|Socialist Worker
Protests against the hated emergency laws and military repression brought hundreds of thousands into the streets across Egypt on Friday of last week.
http://www.socialistworker.co.uk/art.php?id=26255

Saudi police open fire on civilians as protests gain momentum
Pro-democracy protests which swept the Arab world earlier in the year have erupted in eastern Saudi Arabia over the past three days, with police opening fire with live rounds and many people injured, opposition activists say.
http://www.independent.co.uk/news/world/middle-east/saudi-police-open-fire-on-civilians-as-protests-gain-momentum-2365614.html

SPAIN: ‘Indignant’ Protests Heat Up Election Campaign – IPS ipsnews.net
With less than two months to go to Spain’s general elections, the May 15 (15-M) Movement is highlighting the serious problems caused by the financial crisis in the rich world, on the premise that democracy is not just about voting every four years, but an open system in which citizens can and should participate directly in public affairs.
http://www.ipsnews.net/news.asp?idnews=105333

General strike brings Greece to a standstill as public sector closes down
Nearly two years after Europe’s great debt crisis erupted beneath the Acropolis, the people on its frontline have clearly had enough.
http://www.guardian.co.uk/business/2011/oct/05/general-strike-in-greece

A Palestinian political prisoner’s take on Israel’s protest movement
By not dealing with the root causes of the unjust system in Israel, the Israeli social movement wishes to make things less unjust rather than to change the system and the regime.
http://www.electronicintifada.net/content/palestinian-political-prisoners-take-israels-protest-movement/10455#.ToyFQJbQO4w

message from Chinese activists and academics in support of Occupy Wall Street
No matter how brutally the American riot police will attempt to suppress the participants in the Wall Street revolution, no matter how much the global elites – especially those in the U.S. and China –try to suppress news of the Wall Street revolution, they cannot stop the vigorous growth and ultimate victory of the democratic revolution of the people of the world.
http://www.chinastudygroup.net/2011/10/message-from-chinese-activists-and-academics-in-support-of-occupy-wall-street/

Lowkey – Soundtrack To The Struggle… | Album Review | SoulCulture
‎Soundtrack To The Struggle… is a crafted album that takes us on a journey of political punchlines and social commentary, full of emotion with a clever use of album skits, weighty production and showcasing lyrical dexterity and storytelling, displaying Lowkey’s growth as a rapper over the past three years.
http://www.soulculture.co.uk/reviews/lowkey-soundtrack-to-the-struggle-album-review/