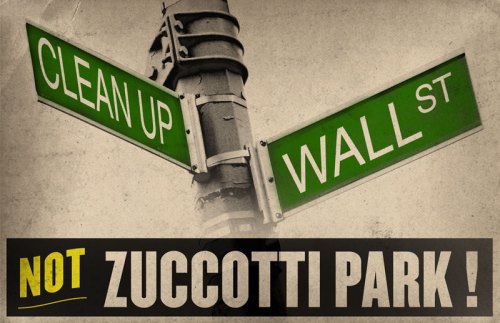 6 A.M. FRIDAY: EMERGENCY CALL TO ACTION: Prevent the forcible closure of Occupy Wall Street!
We know where the real dirt is: on Wall Street. Billionaire Bloomberg is beholden to bankers.
We won’t allow Bloomberg and the NYPD to foreclose our occupation. This is an occupation, not a permitted picnic.
http://occupywallst.org/article/emergency-call-action-prevent-forcible-closure-occ/

Bloomberg tells Occupy Wall Street protesters to clear Zuccotti Park by Friday | Capital New York
Two days after Mayor Michael Bloomberg said protesters could stay in Zuccotti Park “indefinitely” if they followed the law, the mayor visited them tonight to say they had to be out of there by Friday, according to the mayor’s office. The reason given by the mayor tonight was that the park needs to be cleaned. The request to clean the park is coming from the company that owns it, Brookfield Office Properties, on whose behalf the chief executive wrote a two-page letter to the NYPD asking for help “to clear the Park” and to “assist” on an “ongoing basis” to keep the area safe and clean.
http://www.capitalnewyork.com/article/culture/2011/10/3722467/bloomberg-tells-occupy-wall-street-protesters-clear-zuccotti-park-fr

Don’t Let Bloomberg Shut Down ‘Occupy Wall Street’
Sign the petition in defense of the protesters and their First Amendment rights and then spread the word to everyone you know.
http://act.aflcio.org/c/18/p/dia/action/public/?action_KEY=2995

Occupy Wall Street: We are still here
Welcome to Day 27: Despite being despised by the Republicans, we’re still here. Despite attempts by the Democrats to co-opt us and dilute our message, we are still here. And despite the efforts of a silly tax-dodger named Rupert Murdoch, we are all here and accounted for. Don’t give corporate criminals or any of these politicians and media smut-peddlers a hall pass. They need to reform from the bottom up before they are truly on our side. This will take time. Be patient. And occupy the streets and commercial zones of civilization until the power is returned to the people.
https://www.facebook.com/Gilded.Age/posts/164158420340759

32BJ SEIU Press Release: HUNDREDS OF OFFICE CLEANERS RALLY ON WALL STREET FOR GOOD JOBS
New York, NY – To spotlight the need for good jobs and the growing wealth gab between the ultra rich and working people, hundreds of office cleaners, along with union supporters and groups such as Occupy Wall Street marched and rallied today to the New York Stock Exchange.
http://www.seiu32bj.org/au/PR_2011_1012NY.asp

Occupy Wall Street activists cool to celebrities’ visit
“Sharpton and all these guys — are you kidding me?” said Walker, who accused them of using Occupy Wall Street to bolster their profiles while perpetuating things the movement eschews, such as party politics, consumerism and sexism. “We don’t want to be used and co-opted. This is not a game.”
http://www.latimes.com/news/nationworld/nation/la-na-occupy-wall-street-20111013,0,7112422.story

Wall Street = War Street, New Yorkers Join Nation-wide Protests to Mark 10th Anniversary of U.S. War
Protesters mark the 10th anniversary of the US led war on Afghanistan with demands for the end of the wars, an end to U.S. aid to Israel, an end to U.S. bombing and destruction in Libya, and an end to the growing repression at home.
http://www.salem-news.com/articles/october122011/decade-afghanistan.php

#SankofaDay at #OccupyWallStreet by the Malcolm X Grassroots Movement
‎On October 15th, the 45th anniversary of the founding of the Black Panther Party, let’s gather at Zuccotti Park highlighting a unique message: that Wall Street was literally built by our ancestors, through stolen slave labor to enrich the 1%. As people of color in this country, our economic potential has been actively suppressed and undervalued, so we know that Wall Street has been corrupt from the very beginning! It’s nothing new. Together, let us bring our issues to the table to deepen the dialogue at Zuccotti Park.
https://www.facebook.com/event.php?eid=225184487542007

Occupy the Bronx
The Bronx contains one of the five poorest Congressional Districts in the entire COUNTRY. Yet we house a sport franchise that has the highest payroll in professional sports…That is but one example of the duality our borough endures. Please spread the word, as this will be the beginning of us manifesting our own local occupation and further events.
https://www.facebook.com/event.php?eid=231920386862671

OCCUPY TOGETHER
Welcome to OCCUPY TOGETHER, an unofficial hub for all of the events springing up across the country in solidarity with Occupy Wall St.
http://www.occupytogether.org/

We Are the 99 Percent
Brought to you by the people who occupy wall street. Why will YOU occupy?
http://wearethe99percent.tumblr.com/

Occupy Colleges could become largest student protest in 40 years
The largest student protest in American history occurred after the Kent State shootings in May of 1970. Over four million students protested and over 850 US colleges and universities shut down during the student strike. The impact of Kent State and the national student strike that followed soon after had a huge impact on American history. Perhaps the Occupy Colleges movement will as well.
http://www.campusgrotto.com/occupy-colleges-could-become-largest-student-protest-in-40-years.html

Veterans’ Nationwide Occupy Movement FB group created | Iraq Veterans Against the War
The San Diego chapter of the IVAW (Iraq and Afghanistan Veterans Against the War) endorses, supports and stands with Occupy San Diego, as will the national body of the IVAW stand with Occupy Together and Occupy Wall Street.
http://www.ivaw.org/blog/veterans-nationwide-occupy-movement-fb-group-created

OccupyLAUSD | Now is the Time!
This is a call out to the 99% who live, work, play and learn in the Los Angeles Unified School District. It is time we Reclaim Our Schools from the 1% wealthy Billionaires (like Eli Board, Gates, and Walton) and Corporate Management Companies who continue to set educational policies of school giveaways, increases in corporate charter schools, and constant school lay-offs as the new “normal”.
http://www.occupylausd.org/

Irvine 11: Silence is not an Option | Al-Bayan
During the bombardment a friend of mine called his family back home in Gaza asking them how they were doing, to which they simply replied by sticking their phone outside the window so that he could hear the sounds of constant bombs and missiles in the background. I will remind you that Palestinians do not have the privilege of silencing this reality, let alone speaking about it.
http://www.albayanmag.com/2011/10/11/silence-is-not-an-option/

The top 1%
The richest one per cent of Americans earn nearly a quarter of the country’s income and control an astonishing 40 per cent of its wealth. Inequality in the US is more extreme than it has been in almost a century – and the gap between the super-rich and the poor and middle class people has widened drastically over the last 30 years.
http://english.aljazeera.net/programmes/faultlines/2011/08/201181125338194522.html

Watching the One Percent squirm
‎The American One Percent has long had an ace in the hole when the Ninety-Nine Percent start getting rowdy: The Democratic Party, which, now that the Occupy movement has shown it can survive and grow without anybody’s help, is rushing in to offer help.
http://www.socialistworker.org/2011/10/13/the-one-percent-squirm

The fast and furious plot to occupy Iran
‎So how to bury Fast and Furious, the economic abyss, the 10 years of war in Afghanistan, the increasing allure of Occupy Wall Street – not to mention the Saudi role in smashing the spirit of the Arab Spring? By uncovering a good ol’ al-Qaeda style plot on US soil, on top of it conducted by “evil” Iran. Al-Qaeda and Tehran sharing top billing; not even Cheney and Rumsfeld in their heyday could come up with something like this. Long live GWOT (the global war on terror). And long live the neo-con spirit; remember, real men go to Tehran – and the road starts now.
http://english.aljazeera.net/indepth/opinion/2011/10/201110121715573693.html

Occupy Wall Street Doesn’t Adequately Represent Struggling Black Population, Experts Say
“People who are concerned with survival want to know about outcomes,” she said. “What is it you want? Our protests have always been very targeted. You know, don’t put this person to death. We deserve to sit anywhere that is available on this bus. Protesting something like globalization? That is like saying that you are protesting electricity.”
http://www.huffingtonpost.com/2011/10/06/occupy-wall-street-black-population_n_998722.html?ref=fb&src=sp&comm_ref=false#sb=1918408,b=facebook

Silencing Occupy Wall Street and criticism of Israel through demonization
‎The tactics Krugman describes struck a real chord with me – they are exactly like the tactics US-based anti-Palestinian groups are using in their campaign against so-called “delegitimization” of Israel. A “delegitimizer” you may recall is anyone who questions Israel or calls for an end to its occupation, apartheid and other crimes against Palestinians and other Arabs, in short the entire Palestinian rights and solidarity movement.
http://www.electronicintifada.net/blog/ali-abunimah/silencing-occupy-wall-street-and-criticism-israel-through-demonization#.TpcVTWrMqZY

AUSTRALIA: Unions show support for ‘OccupyOz’ movement
Growing union support comes after US labour organisations threw their numbers behind the New York demonstrations in an effort to put pressure on the political leaders there, where joblessness remains at 9.1 per cent years after the financial crisis. In Australia, the jobless rate stands at 5.2 per cent by comparison.
http://www.smh.com.au/business/unions-show-support-for-occupyoz-movement-20111013-1lmmo.html

EGYPT: Egyptian army must answer for deadly toll at Coptic protest
Medical staff at Cairo’s Coptic Hospital, where a large number of the dead and injured were taken after the incident, told Amnesty International that the casualties included bullet wounds and crushed body parts resulting from people being deliberately run over by army vehicles. Witnesses described how security forces in armoured vehicles opened fire into the crowds and killed or injured protesters by running over them.
http://www.amnestyusa.org/news/news-item/egyptian-army-must-answer-for-deadly-toll-at-coptic-protest

PALESTINE: UFree celebrates prisoner release, but calls for release of thousands left behind | UFree Network
Two weeks ago, a hunger strike was launched among the Palestinian prisoners in Israeli jails, with about 2,000 now participating. Their demands include an end to arbitrary solitary confinement of Palestinian leaders and the right to pursue education and receive family visits.
http://www.ufree-p.net/eng/index.php?p=828

PALESTINE: In Photos: Palestinians unite to support prisoner hunger strike
On Tuesday the 27th of September, an open-ended hunger strike was initiated until the fulfillment of 9 demands by Palestinian prisoners, which include the right to family visits, end to the use of isolation as a punishment against detainees, and profiteering of Israeli prisons from financial penalties charged against prisoners. Approximately 3000 prisoners are taking part in the strike including all the different political fractions from eight different prisons.
http://www.palsolidarity.org/2011/10/in-photos-palestinians-unite-to-support-prisoner-hunger-strike/