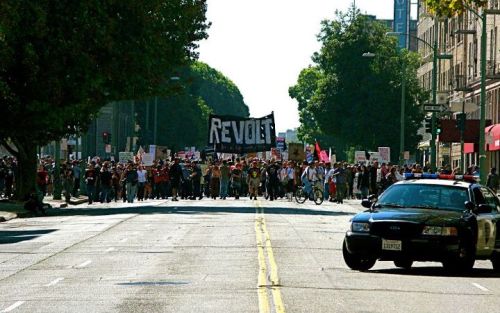 —————–
‎“I think this is one of the ways in which we can deepen and expand the Occupy movement into communities of colour. The issue of arbitrary police power has always been the central issue in poor, black and brown and red and yellow communities.”

Against Rules, Tents Arise at Protest
The posted rules in Zuccotti Park are clear: no camping and/or the erection of tents or other structures. But the Occupy Wall Street encampment is beginning to resemble a tent city anyway.
http://online.wsj.com/article/SB10001424052970204777904576649691966085946.html?mod=googlenews_wsj

Occupy Wall Street puts spotlight on police stop-and-frisk tactics
‎”I think this is one of the ways in which we can deepen and expand the Occupy movement into communities of colour. The issue of arbitrary police power has always been the central issue in poor, black and brown and red and yellow communities.”
http://www.guardian.co.uk/world/2011/oct/24/occupy-wall-street-stop-frisk

Building blocs: Labor, Occupy Wall Street team up
“What you see is the beginning of a movement,” said Marvin Holland, political action director at the Transport Workers Union, who has been a fixture at Zuccotti. “I wouldn’t call it a movement yet, but there’s a tremendous amount of dialogue that you didn’t have a month ago about things that are wrong with the system and how we change it collectively.”
http://www.crainsnewyork.com/article/20111023/ECONOMY/310239975#ixzz1beQFb2Bh

How to Make Banks Really Mad: Occupy Foreclosures » New Deal 2.0
Could the next step after camping in Zuccotti Park be camping out in homes facing foreclosure?
http://www.newdeal20.org/2011/10/19/how-to-make-banks-really-mad-occupy-foreclosures-62167/

ALBANY: Cuomo is ‘Preoccupied’ Wall Street
Gov. Cuomo suffered a rare political defeat over the weekend as he tried but failed to get Albany’s Democratic mayor to do something Mayor Bloomberg won’t do: shut down the local Occupy Wall Street.
http://www.nypost.com/p/news/local/cuomo_is_preoccupied_wall_street_yOKZ6zziY9mAv61426UuSO

CHICAGO: Nurses Protest After Being Arrested At Occupy Chicago Protest
A group of nurses picketed outside Mayor Rahm Emanuel’s office Monday morning to express their outrage, after several nurses were arrested during the Occupy Chicago protests over the weekend.
http://chicago.cbslocal.com/2011/10/24/nurses-protest-after-being-arrested-at-occupy-chicago-protest/?utm_source=home&utm_medium=dl&utm_campaign

CHICAGO: Free speech doesn’t have a curfew
Chicago Mayor Rahm Emanuel–President Barack Obama’s former right-hand man and one of the most powerful figures in the Democratic Party–has made it clear that protesters won’t have the right to freedom of speech and assembly in his city.
http://socialistworker.org/2011/10/24/free-speech-has-no-curfew

LOS ANGELES: Teachers occupy the LAUSD
Our demands are: 1) Tax the 1 percent to fully fund our schools; 2) Keep our schools public–by the 99 percent, for the 99 percent; and 3) Democratic community-based schools, not corporate Wall Street reform.
http://socialistworker.org/2011/10/24/teachers-occupy-the-lausd

LOUISVILLE: Occupy Louisville: Voices From Social Justice Encampment in The Hometown of Muhammed Ali
“They’re trying to denigrate the movement. We’re not going to allow that to happen. We’re going to stand together. We’re going to stand united. And we’re going to show them what it looks like when millions of people take to the streets demanding their rights.”
http://www.democracynow.org/2011/10/24/occupy_louisville_voices_from_social_justice

MILWAUKEE: Occupy the Hood upset over work place proposals
Occupy organizers continue to rally worldwide this weekend. Here in Milwaukee, Occupy the Hood held a news conference Saturday afternoon to draw attention to a couple of state proposals they say are unfairly targeting minorities in the workplace.Those include Senate Bill 207 and House Bill 286, which deal with how to handle the employment of convicted felons.
http://www.msnbc.msn.com/id/45001564/ns/local_news-milwaukee_wi/t/occupy-hood-upset-over-work-place-proposals/#.TqSwSpsr2so

LIBYA: Washington celebrates Qaddafi’s death
Qaddafi was a tyrant whose corrupt rule served to enrich the tiny circle around him, while the mass of Libyans endured poverty and repression. No one should shed a tear that he is gone. But the U.S. government has advanced its imperial interests with its role in Qaddafi’s death and the overthrow of his regime. All those opposed to war and oppression need to speak out against U.S. attempts to determine Libya’s future–and to curb the Arab revolution.
http://socialistworker.org/2011/10/24/us-celebrates-qaddafis-death

PALESTINE: Harvesting olives as a statement of resistance
Palestinian olive farmers face violence from both the settlers and the Israeli military during the harvest season. “Even if they forbid us from our land, we are not going to drink a cup of fear, and we’re not gonna stay quiet.”
http://electronicintifada.net/content/harvesting-olives-statement-resistance/10514#.TqWc8HHTNdc

U.K.: ‘Occupy’ Protesters Force St. Paul’s Cathedral to Close
St. Paul’s Cathedral is losing a significant chunk of money each day after shutting down due to health and safety concerns posed by Occupy London protesters, who have set up a tent city on the lawn on the famous landmark. This is the first time St. Paul’s Cathedral has been closed since World War II.
http://abcnews.go.com/blogs/business/2011/10/occupy-protesters-force-st-pauls-cathedral-to-close/

Cornel West on OWS, Iraq & the Progressive Discontent Obama Faces in ’12 Vote
“We want to be able to connect the corporate greed not just on Wall Street, but in the military-industrial complex, the prison-industrial complex, and the corporate-media multiplex, so that we have an inclusive, systemic analysis, even as we’re willing to bear witness to the love for poor and working people. . . . What the Occupy movement is, it’s been able to show the ways in which both parties are tied to oligarchic rule, both parties are tied to big money. And we’ve got some real possibilities, I think, with it.”
http://www.democracynow.org/2011/10/24/michael_moore_cornel_west_on_ows

Beyond Occupy Wall Street: 11 American Uprisings You’ve Never Heard of That Changed the World
While Occupy Wall Street has been in the news of late, uprisings of the American working class are actually nothing new. In fact, the United States boasts a long track record of actions against corporations and the government.
http://www.alternet.org/vision/152824/beyond_occupy_wall_street%3A_11_american_uprisings_you%27ve_never_heard_of_that_changed_the_world

Sat., 10.28: Existence is Resistance Kuffeya Day at Occupy Wall Street
In solidarity with the people of Palestine, we are asking that on Oct. 28th everyone come to Liberty Plaza wearing their Kuffeya. EIR will be on site silk screening shirts for a $2 donation.
https://www.facebook.com/event.php?eid=274632612568909

Sat., 10.28: Occupy Harlem Mobilization: `We stand in solidarity with Occupiers of Wall Street’
A call to Blacks, Latinos, and immigrants to occupy their communities against predatory investors, displacement, privatization and state repression. Let us assert our Dignity! WE MUST DEFEND OUR COMMUNITIES! THIS IS OUR STRUGGLE, THIS IS OUR MOMENT IN HISTORY. THIS IS PEOPLE’S POWER!
http://wibailoutpeople.org/2011/10/19/occupy-harlem-mobilization-we-stand-in-solidarity-with-occupiers-of-wall-street/

Occupy Together
Welcome to OCCUPY TOGETHER, an unofficial hub for all of the events springing up across the country in solidarity with Occupy Wall St.
http://www.occupytogether.org/

We Are the 99 Percent
Brought to you by the people who occupy wall street. Why will YOU occupy?
http://wearethe99percent.tumblr.com/

What To Do If You’re Arrested at an Occupy Protest – Disorderly Conduct Laws
http://disorderlyconductlaws.com/arrested-occupy-protest/

People of Color / #OccupyWallStreet
Created in response to the lack of racial diversity at #OccupyWallStreet with the purpose of developing critical consciousness within the movement and extending its reach to include those most affected by the current crisis. It is open to all who identify as people of color.
http://pococcupywallstreet.tumblr.com/